Ben Vollers  (born in 1947) is a Dutch artist who has been creating abstract paintings  on both canvas and paper since 1988.

Classic antiquity plays an important role in his work as does European history. The titles of his work very often refer to this. He sees his work as ‘visual footprints of the past’ as it lives and relives in his imagination. His art is in no way an illustration of history or historic stories but rather he moves the past into a present day form of abstract art.

Ben Vollers paints with strong full brush strokes, creating robust planes of colour. The drawing in his paintings takes place in thin intuitive lines that move over and between these planes of colour as a necessary light and rhythmic opposition. There is a great deal of atmosphere in his work which is evoked by the coloured planes and their resonance.

Ben Vollers paints spontaneously and without any preconceived idea. His abstract paintings develop on the spot, with free association of colour, line and form. His physical impulse is particularly apparent in his ‘graffiti type’ lines that move carelessly through the large forms, sometimes they form the start of the painting and sometimes they are the finishing touch.

There is a clear Dutch influence in Ben Vollers’ art, an atmospheric content which is definitely from the Dutch skies  and the water in and around Amsterdam. This atmosphere softens the large, robust planes of colour in his work and gives a depth and added layers to the painting that Ben Vollers demands of himself. 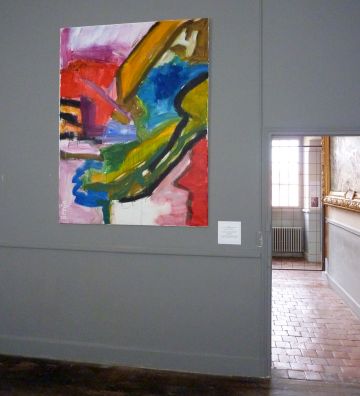 Besides his individual work, Ben Vollers has been painting with Fons Heijnsbroek since 2006 – they produced the Benfo paintings. Large, expressive abstract canvases painted simultaneously on the spot.

1993: To me composition means a sort of balance. I shuffle and move a lot, I move towards a balance as it were. Then I feel I have created something aesthetically beautiful. Because that’s what it has to be for me, even if someone else just sees pigeon shit! Even then there is balance and harmony.

1993: The tonality in my work has a lot to do with depth. Actually I want flatness in my paintings not depth. However, intuitively I still use the tones to create a depth – I can’t not do it! I think in the end I want this paradox in my work. Depth and flatness. As long as the paradox is not apparent there is no painting and I have to keep at it!

1993: The plans in my painting are mobile décor pieces. However, they develop from the way the paint or other material is applied.

1993: Colour influences the way you look into the canvas. Recently I had a good composition, a lot in black but the middle of the black area was too hard. So I changed it to another colour and then another… Then at last the middle area withdrew and became a whole with the rest of the canvas.So, for me, colour is depth.

2004: In my work I often put a timeless and universal atmosphere into abstract images. These images emerge from a personal world of experiences, amongst other things a fascination for ancient cultures and mediteranean influences. I want to express the fleetingness of human cultures with references to remains of old walls, ruins of Greek temples or empty factories.

2004: One could call my method of working intuitive – an exchange between emotional exploration and purely pictoral decisions. Because I want to leave the audience free to form their own interpretation of my work I find that naming the work is not a priority.

2005: I feel closely related to artists of the New York school of the fifties. This is actually a better term than Abstract Expressionism.I know the work of a number of them and their development which really appeals to me; especially the freedom and spontaneity, but also the automatic writing and the ‘gesture’.
I came into contact with their work through the Stedelijk museum and the magazine “Openbaar Kunstbezit” (later Kunstschrift), and even later when I was studying history with history of art as an extra module. When you start painting abstract work you have to stop and think about what, how and why, and that took me to their work..

2005: I just begin (painting) a couple of coloured lines, an area of colour, another area of colour. Then look and see whether I like it, sometimes for days on end.

2006: An important theme in my work is the Myth of Oresteira for instance, (with her classic murder of her mother) that takes place in Mycene in the Peloponnesos. Also the reference of these characters to Jung’s archetypes.  My work is often mythical and sometimes bloody.(Violent)? This raises associations with bloodbaths such as the head hunters of Papua New Guinea or the Dayaks in Indonesia and ancient sacrifices such as that of Iphigineia before the Trojan war.

2006: A totally different line in my work is my experience of ‘deja-vu’ (having experienced or seen something before). The deja-vu in my work has to do with second-hand objects from flea markets, such as razors, vacuum cleaners etc. In some of my work I paint these as abstract collections. But old,disused factories with the weathered walls of the empty buildings all evoking their own history can also lead to this experience.

2007: Personally, the informal artists and their work really appeal to me. I love the material, the marks, the disorder, the coincidental and intuition of it all, the graphic art within.